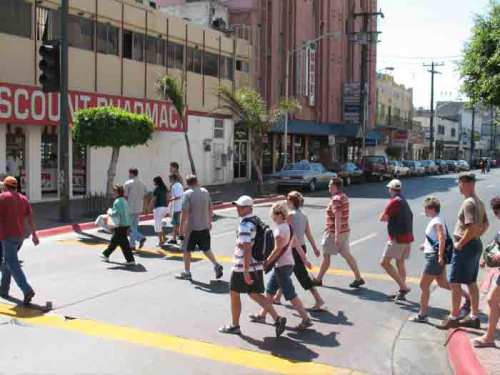 Mexico is an extremely popular destination for Americans. The Los Angeles Times reports that American travelers logged 19.4 million overnight visits in 2007, and that’s not even counting the quick day trips that are made to close border cities like Tijuana and Ciudad Juarez.

Anyone who has caroused down Tijuana’s Avenida Revolucion might be able to understand that not all tourists behave well abroad. On the other hand, not all tourists are treated fairly by Mexican authorities. And in some cases things go really badly for tourists.

The Feb. 3 Los Angeles Times story by travel writer Christopher Reynolds notes that in the fiscal year ending Sept. 30, 2008, 687 Americans were arrested just in Tijuana. Reynolds has other figures for Mexican cities that you can read in the story (link above, or here). The San Diego Union-Tribune reported one recent Tijuana example: The arrest of two U.S. sailors on attempted homicide charges.

Meanwhile, the Houston Chronicle looks at the  number of U.S. citizens killed in Mexico since 2004 in this Feb. 8 article.  The newspaper does a commendable job of pulling together a database of all those deaths and raises good points about the low number of arrests. However,  after noting that some of these 200 deaths are drug-related or due to the victims’ own involvement in criminal activities, the article adjusts  the number of people who are in Mexico for “innocent reasons” to be “at least 70.” Per my own calculations, that means the rate of death for these more typical visits to be  roughly 17 per year.

I don’t diminish the personal impact of each death, but when you consider the millions and millions of visits each year to Mexico I am left wondering what exactly this tells me.