People often ask me whether Tijuana is really dangerous. Well, the U.S. Justice Department’s Bureau of Alcohol, Tobacco, Firearms and Explosives apparently thinks the drug violence is dangerous enough to warn university students about visiting Tijuana and Rosarito Beach during the popular Spring Break period. Some universities have also taken up the “don’t go south” mantra. I have mixed feelings about these advisories from my experience living and working in Tijuana as a reporter.  I wrote about some of the region’s most gruesome crimes – but I never got caught in the crossfire. Here is a recap of a recent, non-newsworthy Saturday evening spent in Tijuana. 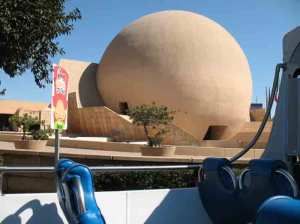 I arrived at Tijuana’s main cultural center, the CECUT, at 6 p.m. to attend a presentation by Mexican scholar Marco Antonio Samaniego on his new book, “Nationalism and Revolution: The events of 1911 in Baja California.” The presentation had a late start (Mexican time frames are typically looser than ours) so I wandered outside and bought some warm cooked corn, called elote or esquite. I like mine plain, but most Mexicans prefer the works: Chile, butter, cheese, lime, salt, you name it. 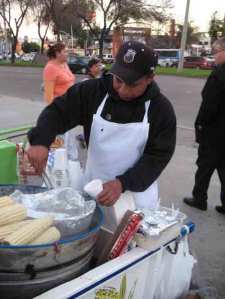 Samaniego talked about the significance of the Mexican Revolution along the Baja border and how chaos basically created a volatile mix of interests that collided and intersected, and that some of this was fueled by the perceived or real threat of a U.S. invasion. More of that in a future blog posting…

Afterwards, I went to the restaurant Tabule to celebrate a friend’s birthday. Tabule is located along the main entrance to the Beverly Hills of Tijuana, a neighborhood called Chapultepec. There is also a Tabule in San Diego. I munched on assorted cheese, duck tacos and a tasty mushroom appetizer. By the time we left at 11 p.m., the place was just starting to get busy (Night life starts late here). 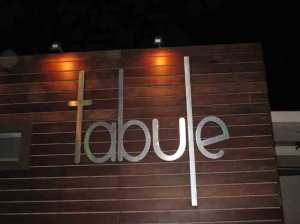 I think I saw some police sirens at one point during the evening – but they were way in the distance.

To get another glimpse of life in Tijuana during a typical weekend, check out Derrik Chinn’s blog where he recently posted an entry on what he did on a Saturday in Tijuana.

The blogger over at Tijuana Bible, Lynn DeWeese-Parkinson, recently went to a soccer game in Tijuana.

And Masa Assassin, an unidentified San Diego-based blogger, dishes about eating some birria tacos in Tijuana before heading to Ensenada this past weekend.

Mexico is an extremely popular destination for Americans. The Los Angeles Times reports that American travelers logged 19.4 million overnight visits in 2007, and that’s not even counting the quick day trips that are made to close border cities like Tijuana and Ciudad Juarez.

Anyone who has caroused down Tijuana’s Avenida Revolucion might be able to understand that not all tourists behave well abroad. On the other hand, not all tourists are treated fairly by Mexican authorities. And in some cases things go really badly for tourists.

The Feb. 3 Los Angeles Times story by travel writer Christopher Reynolds notes that in the fiscal year ending Sept. 30, 2008, 687 Americans were arrested just in Tijuana. Reynolds has other figures for Mexican cities that you can read in the story (link above, or here). The San Diego Union-Tribune reported one recent Tijuana example: The arrest of two U.S. sailors on attempted homicide charges.

Meanwhile, the Houston Chronicle looks at the  number of U.S. citizens killed in Mexico since 2004 in this Feb. 8 article.  The newspaper does a commendable job of pulling together a database of all those deaths and raises good points about the low number of arrests. However,  after noting that some of these 200 deaths are drug-related or due to the victims’ own involvement in criminal activities, the article adjusts  the number of people who are in Mexico for “innocent reasons” to be “at least 70.” Per my own calculations, that means the rate of death for these more typical visits to be  roughly 17 per year.

I don’t diminish the personal impact of each death, but when you consider the millions and millions of visits each year to Mexico I am left wondering what exactly this tells me.

As the border region enters its second year of what I would describe as sustained drug warfare, some people have decided to simply stop going to border cities like Tijuana.

Other people – who have reasons to take extra-precautions for their safety because they own a business in Mexico or are part of a criminal group – make sure they go there as if prepared for battle. I don’t have any statistics on the numbers of armored vehicles being used in these border cities, but I recently noticed full-page newspaper advertisements for several Tijuana region services so there must be a demand for the extra protection that can cost upwards of $50,000.

One of them, Car Armoring Service, is a company I profiled in 2006 for The San Diego Union-Tribune when the business was using its original name of Total Shield-Blindado Seguro. You can read the story here. Amy Isackson of KPBS-San Diego radio did a more recent story in December about armored cars that you can access here. It has an interesting video of Car Armoring’s Tijuana factory that has also been posted on YouTube.

Mexico’s Secretary of Public Security has a listing of 45  car armoring services, according to this online document, but it isn’t broken down by region. One of them, Blindajes Goldman, opened up shop in Tijuana recently. Carlos Guerrero, who runs Car Armoring Service, told me that more competitors have tried to nose their way into the border region. Despite that, he said, business is brisk and his company – which already has offices in Mexicali and San Diego –  will be soon opening another branch in the city of El Paso, Texas.