Mexicans who have migrated to the United States from rural villages have been forming online communities to stay in touch with their families and friends back home. They log onto specific websites (such as that of Tlaltenango.com, above) to share photos, memories and send Yearbook-style greetings. In the process, they are reinforcing cultural, historic and emotional ties.

In some cases, the online communication is also providing a way of reinforcing democratic practices and political debate in Mexico. According to one study about the village of San Martin de Blonan~os, 13.26 percent of messages on that village’s independently-run web site included discussions about politics and accountability (A few examples: The alleged corruption of one of the mayoral candidate members and mine contamination in a local river). The study, by Mexican researcher Miriam Cardenas Torres, provides a fascinating look at the online dynamics of this particular Jalisco community and the technological barriers and benefits to such interaction.

I am not finding a recent link to the paper about San Martin de Bloan~os that I found earlier this year by Miriam Cardenas Torres. But here is a link to another study of hers that mentions San Martin de Bolan~os: “Transnational Migration and Communication” (in Spanish). An additional study by Victor Gonzalez an Luis Castro  – “Maintaining links through the Web: The case of the Mexican communities of immigrants in the United States” (in Spanish) – was published in the Journal of Community Informatices (2007).

I’ve been doing a masters program at USC that specializes in online social networks, so I’m always thrilled when that topic merges with my long-standing interest in border subjects.

Vozmob, or Mobile Voices, is a project that provides a platform for low-wage immigrants in Los Angeles to publish stories and photos about their lives and communities through cell phones. The idea is that “marginalized populations lack access to digital technology yet aspire to participate meaningfully in the digital public sphere,” according to a project summary.

Here is an interview with USC professor Francois Bar, who explains the project in more depth.

Meanwhile USC professor Josh Kun recently wrote in The New York Times about how cell phones are creating new conduits for Mexican regional bands. The songs are uploaded to the phones or are used as ring tones. Then they spread virally through communities, underscoring how the regional Mexican industry is utilizing the cell phone as a “one-stop music source and symbol of working-class immigrant identity,” according to Kun’s story.

Kun, an expert in border culture topics, profiles the success of one of these bands, Los Pikadientes de Caborca, one of whose members readily admits that “we wouldn’t exist without cell phones and ring tones.” 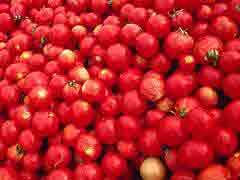 The story of Andres Bermudez, the so-called “Tomato King,” seems to exemplify the American Dream  – but with a distinctively cross-border twist.

Rather then be pegged as a symbol of immigrant success, Bermudez expropriated his own story and added a new twist, returning to Mexico to run for mayor of his hometown of Jerez, a town of migratory exodus in the state of Zacatecas. After holding that post, Bermudez was elected federal congressman in Mexico.

Referring to the Jerez election, Los Angeles Times reporter Sam Quinones wrote in a Feb. 8 article that “Bermudez’s candidacy reflected long-held animosities these immigrants had for Mexico’s elites, who they felt had run them out of the country.” The  Los Angeles Times story  sums up Bermudez’s full-circle migratory life after he died of cancer last week at the age of 58.

To see a news report (in Spanish) on Bermudez, you can watch this YouTube video.

Throughout Mexico this time of year residents re-enact the story of how Joseph and Mary seek shelter on Christmas Eve. The recreated journey – which can be repeated over several nights – ends with a celebratory fiesta at an appointed house.

The border has appropriated this tradition with its own Posada Sin Fronteras (Posada Without Boundaries) at the border fence. La Prensa San Diego reports that the 15th annual event will take place this Saturday from 3 p.m. to 4:30 p.m. at the fence area along  Border Field State Park, .

The Tijuana border posadas create a parallel between the plight of immigrants and how Mary and Joseph seek hospitality in a foreign and unfriendly land, according to a recently-published  book by USC professor Pierrette Hondagneu-Sotelo called “God’s Heart Has No Borders. How Religious Activists are Working for Immigrant Rights.”

I came across the book on a USC colleague’s desk and read the section in which Hondagneu-Sotelo  discusses the meaning of border posadas and shares her own observations from attending one. Hondagneu-Sotelo calls the Tijuana tradition an example of how “symbols and rituals from distinctively Mexican and Catholic traditions mesh with interdenominational Christian beliefs to galvanize moral voice against U.S. border policy.”

This year’s border posada takes place as U.S. authorities  move forward with plans to fortify this section of the fence.

For more information on this year’s border posada go here.

For a short and quick explanation of posadas, go here.

Disclosure:  My job as a media representative at the University of Southern California includes bringing attention to books authored by USC professors and this particular book seemed relevant to this particular blog posting.