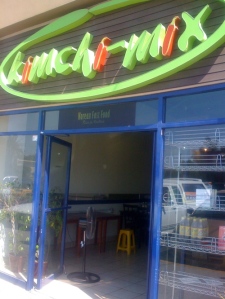 I finally made it out to this Korean restaurant in Tijuana after hearing good things about the food from two people I know. For my first meal here, I ordered a tasty “hemul enchilado,” a spicy seafood and rice dish (see below) accompanied with a bowl of soup.

Kimchi Mix is owned by a Korean family, and they weren’t exactly chatty but they did tell me that there are about “four or five” other Korean restaurants in Tijuana and that half of Kimchi Mix’s clientele is Mexican and half is Korean. I don’t think they get a lot of tourists, in part because of its location in the eastern part of the city.

While trying to learn more about the Korean community and kimchi in Tijuana, I came across a paper by two Mexico researchers about Korean investment in Mexico. Korean companies are among other Asian industries that have opened up manufacturing factories along the Mexican border. But the Korean tie to Mexico goes further back than that, according to a Los Angeles Times article about Korean Mexicans who arrived in the southern part of the country in the early 1900s.

Kimchi Mix has been around for about three years, and I had actually seen the restaurant from afar but wrongly assumed it a Japanese restaurant (quite a few of those here). It wasn’t until a local told me that there was a Korean restaurant near the Carl’s Junior across from the Universidad Autonoma de Baja California, did I realize what  I had been missing. Interestingly, Kimchi Mix’s menus don’t include Korean tacos- at least not yet –  in contrast to what has become quite a Korean taco craze in Los Angeles and beyond.

If you go: Kimchi Mix is open Monday through Friday, from noon to 9 p.m. and on Saturdays from noon to 5 p.m and meals are roughly $5-$7. It’s located in the Otay Universidad section of Tijuana, at the intersection of Calzado Tecnologico and Las Lomas, across the street from the Universidad Autonoma de Baja California’s most western edge – near the Carl’s Junior restaurant. Go here for a Google map reference.