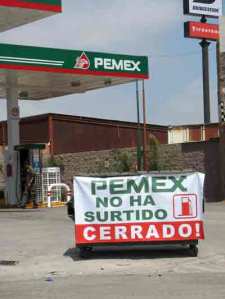 Growing numbers of cross-border travelers have been filling up their tanks in Tijuana before heading back north.  With gasoline costing roughly $2.50 a gallon here, thanks to state subsidized prices, the demand has led to occasional shortages of gasoline in Tijuana.  I hadn’t been affected by this  – until Sunday. With my tank running dry, It took me five tries to find a PEMEX station in Tijuana that had gasoline. I guess I wouldn’t have been suprised if I had read this article in The San Diego Union-Tribune/SignOnSanDiego that warns about the worsening situation.

photo: No gasoline at this and other Tijuana gas stations this weekend. 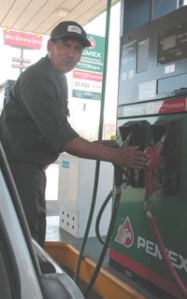