Get a taste of Baja in Los Angeles this weekend 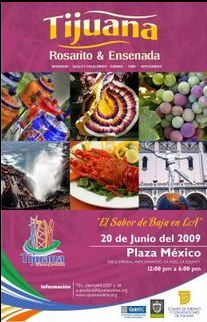 I usually get my taste of  Baja California south of the border, but this weekend  – Saturday, June 20 – the border is coming to those of us who live or work in the Los Angeles area.

Baja tourism officials are holding “El Sabor de Baja en LA,” which will feature food, music and artwork from the peninsula cities of Tijuana, Ensenada and Rosarito Beach. The event lasts from noon to 6 p.m. and it will take place at Plaza Mexico at 3100 E. Imperial Hwy, in Lynwood.

And, in case you didn’t know, some really good wine is produced in Baja that would be worth tasting.

Baja tourism officials did something like this in San Diego recently, too. I am all for promoting this event since it’s the yin to the yang of less savory subjects that make Baja such a fascinatingly complicated region. Thanks to Bill Esparza over at his blog, Street Gourmet LA, for the heads-up on this one.

Mercado Hidalgo a breath of fresh air in Tijuana 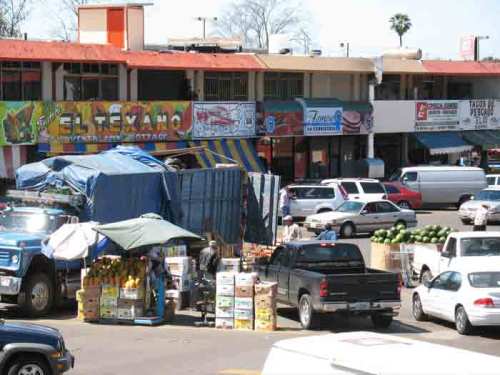 It’s easy to overlook Tijuana’s Mercado Hidalgo, which is hidden from outside view by thick, citrus-colored walls. But once you find the marketplace, it’s a pleasure to get lost in the smell of spices, the rows of fluttering pinatas, and the colors of tropical fruits. Nestled in the city’s Zona Rio area, not far from the San Ysidro border,  the market reminds me of those bustling village-style markets in Mexican pueblos deep in the country’s interior.

Mercado Hidalgo is comprised of  several generations of vendors with roots that go back to  the mid-1900s. Reflecting the region’s unique border identity, the market got its start when vendors brought produce from California and Arizona to Tijuana. That was before Mexico built better roads to connect Tijuana with the country’s interior. Now most all of the produce comes from Mexico and you will often find nostalgic Mexican-Americans stocking up on their favorite foods.

During my last year as a reporter at The San Diego Union-Tribune, I learned how to do multi-media presentations. Go here for a virtual visit of Mercado Hidalgo, which includes interviews with merchants, photos of the produce, a history of the market and a locator map. 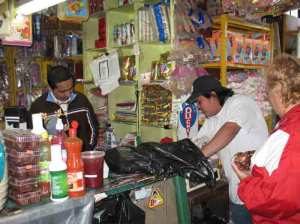 I’m not a big fan of menudo or  pozole, but the soups have such a strong following in Mexico that entire businesses are built around serving them. Lately, the pozole-makers had to deal with some bad PR  since the soup name showed up in headlines related to the arrest of a drug cartel suspect who made an entirely different kind of pozole.  (I’m not going to spoil your appetite, but you can learn more here (Los Angeles Times), here(video),  and here(El Universal)

I do like Caldo Tlalpeno, a chicken-and-rice soup punctuated with a super-hot, large chile. Garbanzos and avocado chunks provide additional texture, along with onion and cilantro sprinkles. Served with corn tortillas, I find it to be quite satisfying. My personal favorites in Tijuana are the ones at Ricardo’s (pictured above) and the old Victor’s restaurant, though I’m sure there are plenty of other great ones.

On the same subject of soups, the Los Angeles Times recently ran a story about Mexico City opening its first ever soup kitchen due to the tough economic times. You can access the story and video, by Deborah Bonello, here.

North of the border,  here’s a “Caldo de Camaron” recipe from a blogger who dishes up shrimp soup secrets and her own interesting perspectives on the Eastside of Los Angeles at her site, Swapmeet Chronicles.

picture of Caldo Tlalpeno at Ricardo’s restaurant in Tijuana 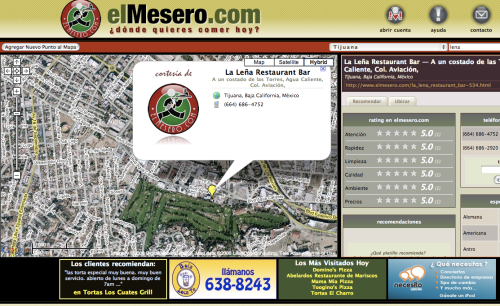 El Mesero – or “the waiter” – is a Spanish-language restaurant web site  based on the Yelp model of rankings, recommendations and handy maps. I find the service interesting because I am studying the creation and management of online communities at the University of Southern California and so I naturally gravitate to examples of how this intersects with the border.

On El Mesero, You can find Chinese food  in Tijuana and  track down the nearest Tacos el Gordo, a popular cross-border chain that started in Tijuana. Since much of the content appears to be user-created, you won’t find everything. Try searching for a McDonald’s in Tijuana and you are out of luck. But Bob’s Big Boy, a favorite Tijuana burger establishment here, shows up.

Menu listings are available for some of the places, as well as links to the restaurant sites. Tijuana had 2,116 food places on the site when last checked.  Looking up Brazilian food, I was glad to find Pampas, a Zona Rio restaurant I like for its succulent meats and robust salad bar. Spanish-language information is available for other cities in Baja California and around the world – including San Diego –  though places like Moscow (with just one listing) still need to be fleshed out with content.

I exchanged emails with the founder of the site, Francisco Ito, of Tijuana. He says he is a web programmer – not a restaurateur. He said he started the site because he saw a need to create an online directory and community forum of food and drink establishments, and I agree that is something that has been sorely missing in Tijuana.  El Mesero can be found at  http://www.elmesero.com/. I am posting some of the information he sent me (in Spanish) to the comments section below. . .

A slice of Cuba in Tijuana

Two years ago the city of Tijuana announced a “sister city” relationship with Cuba’s capital in addition to the one they have had for years with nearby San Diego. I was working as a border reporter at the time, and my research led me to a Cuban restaurant that had been started by a Cuban chef and his Mexican wife. It was the only one, as far as I could tell, in this entire city of more than 1.5 million people.

I’m happy to report that Sabor y Son is still open, and doing brisk business. During a recent weekend, I snacked on a Cuban-style combo plate as the place filled up with other diners eating in the small but cozy space that looks out into the street. The restaurant, which has been designed to make you feel like you are in a palapa or thatched hut,  has become a sort of informal meeting place for other Cubans. In deference to local tastes, the owners make sure to provide their mostly Mexican clientele with an ample supply of chiles (which aren’t part of traditional Cuban food). 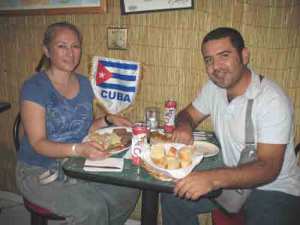 An estimated 200 to 400 Cubans live in Tijuana, where they find the culture and language more familiar than life in el Norte. There’s been some recent news reports that more Cubans are crossing into the United States through Mexico, particularly in Texas. Conversely, Cuba is a popular destination for many Mexicans (who are known to pack jars of chiles for their personal consumption). Tijuana has regular flights to the island.

Mexicans sometimes feel caught in the middle of the chilled relationship between communist Cuba and the United States. Mexican border states in particular are economically linked to their northern neighbor, for better or worse. At the same time, many Mexicans privately respect Cuba for standing up to the United States. You can read the original story I wrote about the Havana-Tijuana sister city relationship here.

Directions: The restaurant is not in the main dining section of Tijuana.  If you are going by car from Avenida Revolucion, you would go to the end of Revo where it curves left and becomes Blvd. Agua Caliente. Continue through Agua Caliente (as it becomes Blvd. Diaz Ordaz)  about 10-15 minutes, passing the large hotel towers on your right. Look for the Geo municipal auditorium on your right. You will turn left at that intersection onto Blvd. Las Americas. Pass the railroad tracks and continue about two blocks. Look for the Cuban flag logo on your right. Restaurant is open 10 a.m. to 8 p.m. Monday through Saturday at #218 Blvd. Las Americas. 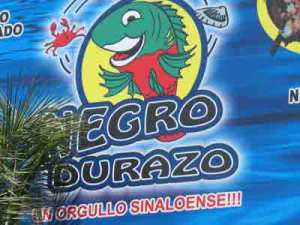 The first time I went to a Sinaloan seafood restaurant in Tijuana, I was a little nervous. Based on their reputation, I was prepared for ear-splitting live music and perhaps a gunshot or two.

The state of Sinaloa is considered to be the craddle of Mexican drug trafficking, and I’ve occasionally heard Baja California law enforcement officials bemoan the “Sinaloan factor.” Never mind that Sinaloans here comprise the majority of migrants* from other Mexican states so they are also bound to be your in-laws, neighbors and fruit vendors.

Sinaloan associations have tried to get the public to see the more positive side of their contributions, namely their food, but it’s been a tough sell. I finally went to Negro Durazo** for the first time a few years ago and found the food to be scrumptious: fish and seafood battered in cheese and unbelievably rich sauces.

This weekend, The New York Times ran a story about how ongoing drug-related violence is affecting people’s lives in large and small ways, and it quotes an unnamed source as saying he’s avoiding Sinaloan restaurants lately for their fair-or-not association with gangster clientele. I know a few people who have avoided Sinaloan food places their entire lives, which is an unfortunate reaction to the convergence of reality and perception.

If you want to try Sinaloan food in Tijuana without the ambience, there’s a mini-branch of Negro Durazo at the Zona Rio mall food court, just a few minutes from the San Ysidro Border on Paseo de Los Heroes,  There’s also a Negro Durazo north of the border, in Chula Vista.

* A study on Baja California migration says 16.6 percent of the state’s residents come from Sinaloa.

**I once tried to get someone at Negro Durazo to explain to me the origin of the nickname, but no one seemed to have an answer. Perhaps the most famous “Negro Durazo” was Arturo Durazo, a controversial Mexican police chief from more than two decades ago, who amassed an illicit fortune.