This is part nine of a series of blog posts about a ten-day trip I recently took south of the border through the Mexican state of Sonora and then back up north (after a ferry trip across the Gulf of California) through the Baja Peninsula.

By Saturday, most of the New Year’s revelers in Mulege had shaken off their hangovers and the village  returned to its normal routine. We left our car at an auto shop (a result of  the previous day’s mountain excursion) and then met up with Salvador Castro, a local guide who would take us to the Trinidad Canyon – a rocky outcrop that is decorated with smatterings of pre-Columbian painted art.

Our travel companions included a German family, and a mother and daughter from Mexico City. We first went to a government office where we obtained permits to hike into the protected area. Then we scrambled into Salvador’s white van. It all was very deja vu. I had done this trip three years go with Salvador as a guide but I don’t think he remembered me.

Along the way, Salvador took us to a citrus orchard where we willingly bought some juicy oranges. Back in the van, the Germans got photo-happy about seeing some vultures spreading their wings on the tips of cactus. Salvador made a stop along the way to talk about the medicinal qualities of certain desert plants.:

After more than an hour we arrived at a house that would be our jumping-off point for the hike. I knew that we would be crossing a pool of water on our way to the caves. I remembered it as being about waist- or chest-high, and that I had used a rope to balance myself as I crossed the slippery rocks.

So I was a little surprised to encounter  – not a manageable pool – but a lake.  We would have to swim.

After much heming and hawing, we all made it across. It took about 12 seconds to get to the other side, but the water was so cold that I felt like I was hyperventilating when I finally forced myself into the water after much delay. Not far from the water, we encountered the first markings of cave art:

We did more hiking, including wading through some more manageable water patches:

Then we reached another section of cave art:

By then the kids of our group were getting hungry so we scrambled back down to the hiking path. This time, I plunged right into the lake water to hurry things up. Salvador had brought a cooler with food and drinks so we had lunch on a rock slab before heading back to the house where the van was parked at.

Back in Mulege, we picked up our own car and grabbed some dinner around 5 p.m. before heading across the peninsula to Guerrero Negro. The drive took us four hours. It was uneventful except for a couple of stops at military checkpoints and an unfortunate  hit-and-run with a coyote that left a scrape on the car’s front.

To  make arrangements for the hike, we just went to the Hotel Las Casitas in Mulege and asked how to reach a guide. They dialed up Salvador and put him on the line for us. The trip cost about $180 for the four of us. You leave around 9 a.m. and return by 4 p.m. During the rainy season, ask about the height of the water you will be crossing to visit the caves. It’s a good idea to wear swimming clothes underneath your hiking clothes. Salvador provided a waterproof bag to protect clothes and camera equipment. Salvador’s web site: http://www.mulegetours.com/

Trip from Mulege to Guerrero Negro (see the blue dotted lines on the map below) is roughly four hours. 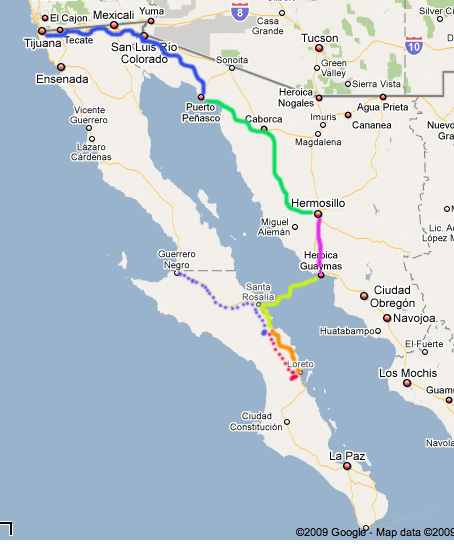