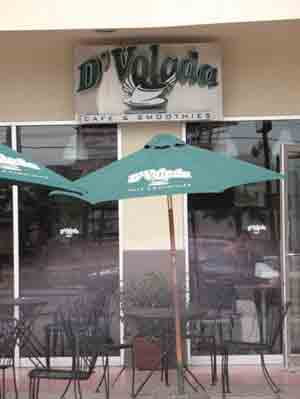 It’s hard to miss the many  D’Volada coffee shops around Tijuana. D’Volada’s franchises sport green-and-white exteriors and woodsy interiors that remind me of a certain global coffee business north of the border.  But the interesting thing about D’Volada is that its founders saw an unmet need  – not so many coffee places in Mexican cities – and got a head start before the inevitable Starbucks invasion.

The D’Volada brand started here in Tijuana in in 2ooo. Since then, D’Volada – which means roughly “on the go” – has really taken flight, expanding to eight other states in Mexico. It seems to be particularly popular among the bleary-eyed commuters heading to San Diego in the wee morning hours (roving  D’Volada employess will take orders from your car). D’Volada has even crosed into the United States with a D’Volada shop in Chula Vista, Calif., the home of many  upper-income Tijuana expats.

When Starbucks arrived in Tijuana in 2007 you could almost smell the coffee wars brewing. USC professor Josh Kun, who calls D’Volada a “glocal” success story, wrote a story in the Los Angeles Times that explores how the arrival of Starbucks in Tijuana evoked manifestations of Mexico’s class divisions. I’m not a coffee connoisseur, so all I can say is that I may drink Starbucks north of the border but I support the homegrown brand when I’m in Mexico.