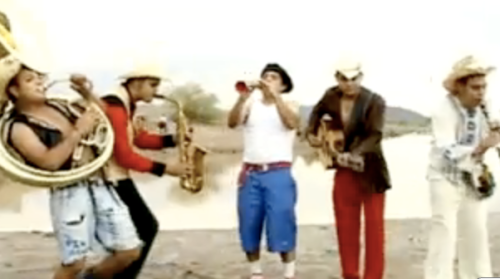 I’ve been doing a masters program at USC that specializes in online social networks, so I’m always thrilled when that topic merges with my long-standing interest in border subjects.

Vozmob, or Mobile Voices, is a project that provides a platform for low-wage immigrants in Los Angeles to publish stories and photos about their lives and communities through cell phones. The idea is that “marginalized populations lack access to digital technology yet aspire to participate meaningfully in the digital public sphere,” according to a project summary.

Here is an interview with USC professor Francois Bar, who explains the project in more depth.

Meanwhile USC professor Josh Kun recently wrote in The New York Times about how cell phones are creating new conduits for Mexican regional bands. The songs are uploaded to the phones or are used as ring tones. Then they spread virally through communities, underscoring how the regional Mexican industry is utilizing the cell phone as a “one-stop music source and symbol of working-class immigrant identity,” according to Kun’s story.

Kun, an expert in border culture topics, profiles the success of one of these bands, Los Pikadientes de Caborca, one of whose members readily admits that “we wouldn’t exist without cell phones and ring tones.” 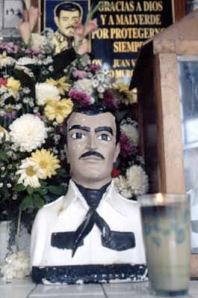 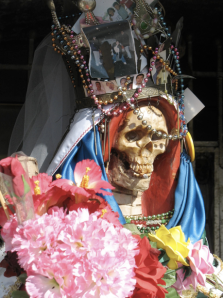 For many years, the mustachioed Jesus Malverde was the “saint” that drug traffickers went to when seeking spiritual support. But lately Jesus Malverde seems to be getting some competition from a skeletal figure called Santa Muerte or the Saint of Death.

When Mexican authorities detained suspected trafficker Angel Jacome Gamboa, aka “El Kaibil,” at a Tijuana banquet hall in March, they found him carrying a gun that had been emblazoned with an image – not of Jesus Malverde – but of the Santa Muerte.

In recent weeks, I’ve run across a few U.S.-based reporters seeking experts to speak on the Santa Muerte’s growing popularity north of the border (according to this 2007 Time article, they are a little late). South of the border, I’ve also noticed several stories in the media about Mexican authorities knocking down the Santa Muerte’s shrines. Followers in Mexico City recently marched in protest of the actions, according to this Reuters article.

To be sure, the two unofficial “saints” aren’t exclusively worshipped by drug traffickers.  The Santa Muerte had been used to pray for life-saving miracles as well as death to enemies, according to the Time article. Malverde may have been based on the story of a bandit killed by Mexican authorities in 1909. Their presence possibly represents the erratic results that came from imposing the Catholic religion on a country  with its own indigenous faith traditions.

Meanwhile, I’m wondering if all the attention on the trendy Santa Muerte might lead to a nostalgic resurgence of interest in Jesus Malverde.

Photos approved for public use. Click photo for credit.

The telegram is still alive in Mexico 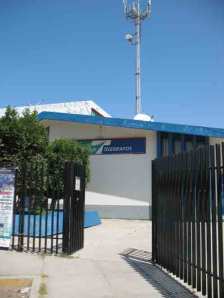 For most of us, the telegram is a quaint, historical footnote. It had its heyday in the early 1900s until long distance phone calls and other advanced communications rendered the delivered messages obsolete in certain parts of the world. Electronic mail may have been the final screw in its coffin. The last telegram in the United States was delivered in 2006 through Western Union,  according to this NPR story. But here in Mexico, the telegram lives on. This is a picture of a telegram office in Tijuana, which was open on a recent Sunday. Though I’m told that many of the transactions here involve wiring money to relatives, (Tijuana is a city that attracts a large number of migrants from other parts of Mexico)  the telegram apparently still serves a purpose in communicating with friends and families in remote villages that have limited or no access to phone and computer networks.

Here is a link to Mexico’s Telecom-Telegrafos with a photo of telegram deliverymen on motorcycles. In Mexico, telegrams can be delivered within 24 hours through “ordinary” service and 12 hours for “urgent” messages.

Western Union also seems to still be offering telegram notes from the U.S. to Mexico, according to their web page. 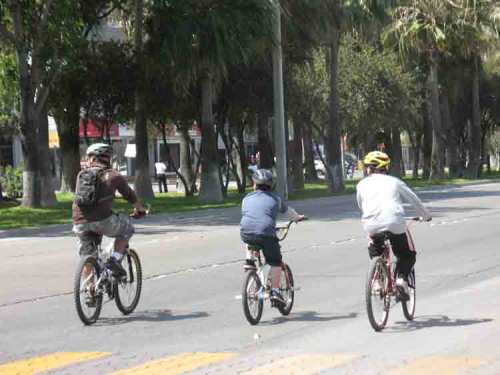 Normally, the street of Paseo de los Heroes is full of cars and not at all the kind of place where you would linger at. But that has all changed on Sundays when local police close off a portion of the street’s access points to vehicles. From about 10 a.m. to 2 p.m. the city’s residents are invited to reclaim Paseo de los Heroes through a new program called “Via Libre, La Calle es Tuya.” That roughly translates to “Open Road, the Street is Yours.”

Curious, I dropped by on a recent Sunday and saw enormous potential. With no cars in sight, residents were able to do laps on their bicycles (some free rentals are available, too!). Kids on skateboards and inline skates took to the asphalt. Young children pedaled furiously on tricycles. There was entertainment, too: A giant chess game, a giant Jenga game, obstacle courses and a pair of strolling musicians who let volunteers step in as conductors. Families lounged on the grassy center divide near a small collection of photos and paintings, a few couples brought their leashed dogs, and a pair of young guitar players strummed on a street corner. 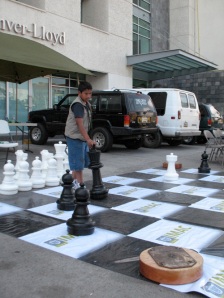 Not a lot of people seem to be aware of the program so it will be interesting to see how the Sunday street scene evolves. I’ve written before about how Tijuana doesn’t have a sense of centrality like other Mexican cities that were built around a traditional plaza. A four-block area along Paseo de los Heroes may not make a square, but it’s a linear start. The program is expected to last through November. 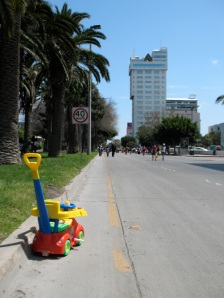 To get there: Paseo de los Heroes is one of the city’s main streets and a major entrance and exit point for the San Ysidro border. Signs at the border will guide you to the street, which takes you to the city’s Zona Rio business district and the CECUT cultural center. The closed-off portion starts at the traffic circle of the Indian (Aztec ruler Cuauhtemoc). You can park at the Zona Rio mall or one of the nearby side streets. 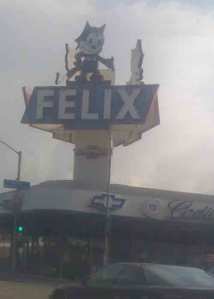 San Diego Magazine is publishing a series of stories about drug trafficking along the border. In the first installment, S.D. Liddick explores the case of the 2006 beheadings of the Rosarito Beach police officers, which was linked to the Arellano-Felix drug organization. It’s well worth the read. Liddick spent considerable time collecting information for this story. I know because at one point when I still worked at The San Diego Union-Tribune, he lost the cell phone number for the former Rosarito police chief Valente Montijo-Pompa  – and I helped him get back in touch with the chief.

The story is skillfully written with powerful insights into the corruptible forces of drug trafficking, including some fascinating quotes by realist Montijo-Pompa, who freely admits “I’m not going to fight with somebody whose circumstances are 1,000 to my one. I’m not going to be a hero—to kill my people. I’m not going to sacrifice others or convert Rosarito into a battleground or put innocents in the middle.”

With Mexican drug trafficking violence the “hot” topic over the past year or so,  many media groups are jostling for a chance to claim their stake in this story. Of course, the story has been going on for years but the degree of attention tends to correspond to body counts. It’s no surprise that San Diego Magazine would explore this issue in depth, and kudos to the magazine for investing the time and resources in doing so. I look forward to reading the upcoming installments. My only issue with the first article is that I think it takes an unwarranted and unsubstantiated swipe at the quality of border coverage by other media groups in a curious attempt to elevate the article’s authority. You can read my opinion in the story’s online comments section.

Read the first installment of “Blood of Their Brothers: The Border Trilogy”  here.

Photo of car dealership in Los Angeles with no apparent link to the Arellano-Felix organization whatsoever.

Helping out other kinds of Tijuana dogs… 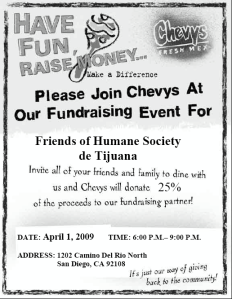 If you aren’t in the mood to try out a Mexican style hot dog, here’s an April 1  fundraiser in San Diego to help out Tijuana’s street dogs. Click on the poster for a link to the web page of the Friends of  Humane Society de Tijuana. The group was also featured in a recent Del Mar Times article about an adoption drive in Solana Beach for rescued Tijuana dogs.

And don’t forget the ZAPP Spay/Neuter Project of San Felipe, on the other side of the Baja peninsula. They also hold regular fund raisers and spay and neuter clinics for cats and dogs. You can learn more about them on their blog.