Tijuana isn’t the easiest city to figure out. Most traditional Mexican cities are squarely built around a plaza that serves as the community’s religious and governmental meeting point, but in Tijuana there is no real center. So it’s no surprise that tourists typically stick to the tried-and -true strip of  Avenida Revolucion. I didn’t get much beyond that part of the city myself until I worked here from 2000-2007.

Tijuana is trying to help visitors get to know the city better with a tour bus service that started this summer. The idea is a great one: Take tourists to parts of the city they would not normally visit and make it easy for them to hop on and off the bus. I did this recently, and got to see the city in a whole new way from my usual vantage point behind the steering wheel of a car.

You can  make a day out of the $10 trip by getting off the bus at the Tijuana brewery or L.A. Cetto wine cellar for some homegrown drinks (unless it’s Sunday). You can also throw some pesos into slot machines at a new betting anex at the Hipodromo and grab some food in the city’s upscale Zona Rio business district to name a few possiblities.

When I took the bus one Sunday, though, there was only me and my party of four. I’m not sure if that’s because it’s not being advertised enough or because people are staying away due to recent drug-related violence. That’s a shame because the view from the bus is an inspiring one and as we passed by tourists walking down Avenida Revolucion, I couldn’t help think what they were missing.

The starting point for the bus tour is the CECUT cultural center, but the bus stops at the Mexicoach station on Avenida Revolucion, and you might want to ask if you can board it there. For more information on the bus tour,  go here.

And to see more photos I took during the city bus tour, go to this page. 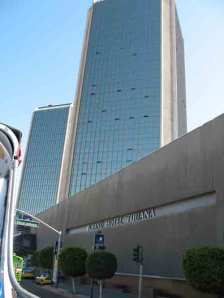 Tijuana city scene from the bus (above)