Where do old garage doors go? In some cases, they end up here in Tijuana where they are cut up to fit the domestic needs of the city’s poorer families. Here are a few examples of how garage doors are transformed to provide shelter and protection in a typical lower-income neighborhood.

Garage door businesses north of the border often sell or give away the used doors to cross-border entreprenuers who then re-sell them to residents here for about $25, according to a 2000 article in The Los Angeles Times that was reprinted here.

The garage door homes are found in parts of the city that are typically populated by recent immigrants who need affordable structures. The city, which draws people from all over Mexico, is reportedly growing at a rate of about 4-5 percent annually (compare that to 1.6 percent in San Diego County, according to SANDAG figures). 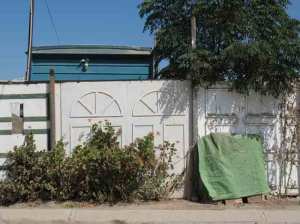 Contrary to popular belief, not all the newcomers are heading to the United States. Many come here to work at the region’s international maquiladora factories.

Tijuana provides them the opportunity to earn comparatively higher wages than in the interior of Mexico. The garage door is their slice of the so-called American Dream.