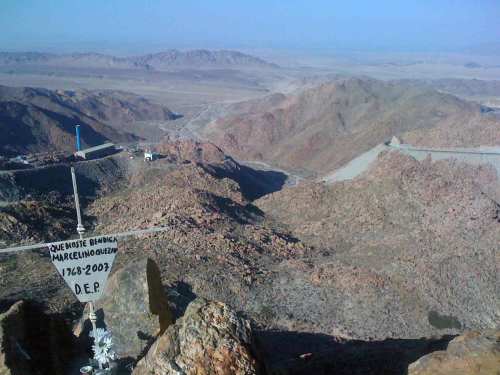 The road between Tijuana and Mexicali is full of hairpin turns and rollercoaster dips through a mountainous area called La Rumorosa. The stunning scenery includes desert views and picturesque clumps of oddly-shaped boulders that look like they were left behind by an army of beleagured Sisyphus clones. I always was secretly thrilled when my work required a trip to Mexicali because it meant driving through La Rumorosa. I find myself drawn to stunning places with an element of danger and I think La Rumorosa epitomizes that on many levels. Like an Aztec-worshipped deity, the mountains demanded their sacrificial victims. The bodies of three Mexican federal agents who had been working with U.S. investigators on a major drug cartel investigation were found here after being tortured and killed eight years ago. And one time I stopped to admire the view and counted twelve rusted and mangled carcasses of cars that had tumbled into the abyss. Because of this – or in spite of this –  I find the drive through La Rumorosa to be an almost religious experience with its poetic juxtaposition of aesthetics and mortality.

To get a glimpse of what it’s like, check out this video originally posted on YouTube by Cristian Martinez of Mexico:

Map of road from Tijuana to Mexicali through La Rumorosa: