It’s not just in Mexico 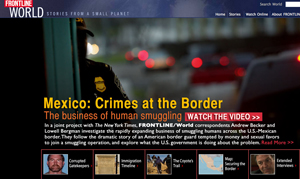 I’m doing some catch-up with this blog and I wanted to include a link to a Frontline/World documentary on corruption along the border that was aired in May. “Crimes at the Border,” which was done in conjunction with a New York Times report, focused not on corruption in Mexico, but on corruption among our own U.S. agents and officers.

This is a topic that would have pleased Jesus Blancornelas, the crusading Mexican editor of the Tijuana weekly Zeta (who died in 2006). Reporters were always making pilgrimages to Blancornelas to quote him for their own stories on drug trafficking and corruption in Mexico. On my first visit in the first few months of 2000 he talked about how Mexico gets a lot of international flak for not doing enough to curtail drug trafficking and yet he believed there’s something fishy going on in the U.S., too,  if the drugs are making it to the streets.

The Frontline piece looks at some of those fish. Disclosure: I helped the Frontline crew out with the Tijuana portions of the program.